What Happen with our Politics and Democracy …? 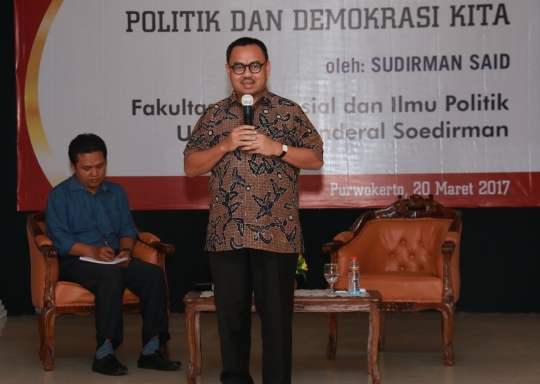 That is the topic discussed in the general lecture held by FISIP Unsoed on Monday (20/03) ago in the Fisip Hall. A public lecture entitled “Honoring Our Politics and Democracy“, presents a speaker Sudirman Said, Former Minister of Energy and Mineral Resources of the Republic of Indnesia, who currently serves as Chairman of the Harkat Negeri Institute. Present Dean and Vice Dean, Board of Trustees Harkat Negeri Institute, Program Director Harkat Negeri, as well as lecturers and students. No less than 400 participants attended a public lecture packaged in an interactive discussion and guided by Tobirin, MSi.

Dean of Fisip Dr. Ali Rokhman, M.Sc., in his speech said that the theme raised in this discussion is very interesting, because the political constellation in this country, can not be separated from party political elite. The case of papa ask for shares and control of foreign companies in the management of the country’s natural resources is evidence of political elite domination. “Similarly, finding Freeport’s problem is not just a mining company issue, but it is a political and democratic issue and the economy of the country”, he asserted.

The current state regime is the regime of extraction, the regime that exploits the interests of large groups (people) for the interests of certain small groups, then where is the position of the state to prosper the community. Indonesia has a huge capital to become a great nation and has economic strength, plurality is high enough but has a high harmony as well. At present it may not be enough, but it will be a proper or an opportunity for the progress of a nation. The current economic strength is shifting from established countries (Europe and America) to developing countries (Asia and Africa) that have enormous resources. In his speech delivered, “Currently Indonesia is ranked the top 10 of the world, but 15 more years can be in position 4 or 5 of the world”. The requirement is directed bureaucratic reform, consistent corruption eradication, scale up for sure development and consistent law enforcement.

Why should Indonesia’s politics and democracy need to be revitalized? Described that Indonesia’s politics and democracy had been noble before and early independence, our founding fathers made politics a way of devotion, but now on strategic decisions, more than 55% of council members skip, the productivity of legislation is very Low, no regeneration of political parties and all lines are stuck corrupt and evenly distributed. Indonesian democracy is very expensive, dominated by cukong so there is no meritocracy and gab between the elite and the people is very big. The politics of the Republic of Indonesia has led to self-destruction or self-destructive politics. How can we revive the politics of this country? “Restore politics to its holy mission, regenerate party leadership, political party financed state, open recruitment and run meritrokasi”, he stressed.