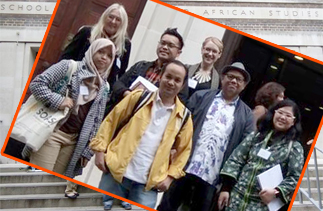 Lecturer Department of Sociology Fisip Unsoed be presenters at the Conference of the Association of South East Asian Studies in the United Kingdom (ASEASUK) dated September 16 to 18 2016 United Rayakota London. ASEASUK a biennial conference organized for the fourth time. Acting as the host is SOAS, University of London (SOAS) University of London.

ASEASUK conference was attended by about 100 people comprising scientists and students of Southeast Asian studies from different countries in Europe, Asia Pacific, and North America. The conference also featured a presentation of the participants were divided into various sessions held in parallel.

Dr. Haryadi presenting a paper entitled ambiguity and Identity of the Young Audience of Indonesian Islamic Films. The paper discusses the films of Islam in Indonesia, which has become a phenomenon since 2008 when Ayat-Ayat Cinta broke a new record for ticket penjulan, surpassed other films, including the selling of a Hollywood production. Appears the view that films Islam consciously produced to teach the principles of Islam to young Muslims. According Haryadi, the fact challenges the view that young people are passive recipients as stated by the theorists of popular culture.

The lecturer who earned his doctorate at University of Western Australia have found that the Young Muslims are ambiguous to the emergence of films Islam. they see these films are no different from non-Islamic movies, just being entertainment to a different style of Hollywood and Bollywood. Others admire the creativity of the director for making films Islam with a variety of themes, even the latest Islamic movie genre shows traveling overseas (overseas travel) that has not been raised by the films of Islam in 2008 and earlier.

Traveling theme is interesting because in accordance with the desire of young Muslim children at this time. Haryadi also found that watching a movie for young children Indonesia is an important way to establish their identity because there is such nuances religious rituals when they watch movies, especially with Islamic themes. The phenomenon of films Indonesia Islam helps young people to form their own identity.